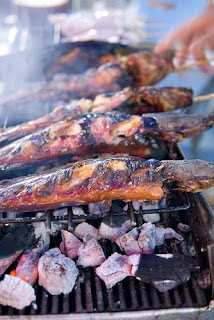 Memorial Day weekend is considered by some the official camping kickoff, but more Americans are likely to head to their own backyard or local park to enjoy a barbecue with friends or family.

My family had a delightful barbecue this afternoon and I had my fill of succulent salads, yummy drinks, and tender meat. But among the hot links, beef ribs, and chicken, I thought fish would have been a nice addition to the grill, for both waistline preservation, and because it’s just plain delicious when done right.

In between bites, I tried to recall when my late father ever grilled fish on the BBQ, and could not think of a single instance. My Texas father preferred his (cat) fish deep fried to a hard cornmeal crisp, then dotted with Louisiana Hot Sauce before his first bite. While my mom ruled over the kitchen, the outdoor BBQ was dad’s domain. He seemed to take pride in turning over the massive slabs of ribs over smokey oak wood coals. But did a fish ever share the grill with beef? Never. Maybe there is something primal about a man like my dad who loved cooking “the kill” over an open flame. And if this theory is at all true, I humorously imagine that a fish fillet on a grill might represent a weak hunting effort.

Grilled fish came into my life later once I moved to 1990’s San Francisco, where everyone was either obsessed with food, or a worker in some aspect of the culinary world. With my roommates and our friends, we experimented with grilled salmon, trout, and mahi-mahi, using inspired marinades.

I’m looking forward to another outdoor feast on Memorial Day. It’s a potluck, and I’ve just decided to bring a little flair with a salmon recipe I’ve enjoyed before.

Another nice fish for grilling is trout. The following recipe will have your guests singing your praises because the fish tastes great and looks real sassy served out of its cornmeal husk:

Preparation:
Preheat grill for medium heat. Remove any bones from the fish. Season with salt and pepper. Place two slices of bacon (or substitute lemon slices) in each fillet. Close husks and secure with string. Place corn husks on grill and cook for 15-18 minutes, or until fish is cooked through. Remove from heat and serve.